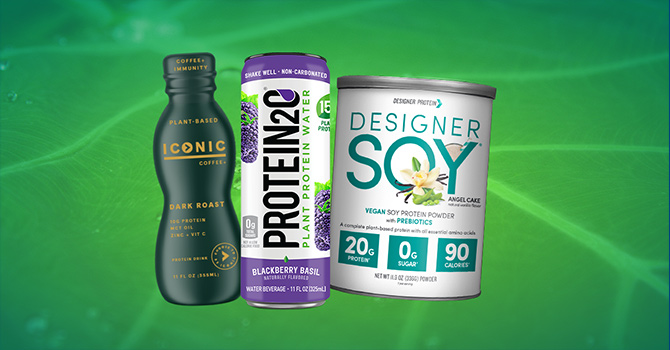 As consumers continue to embrace plant-based diets, the protein drink category is no exception to the growing trend towards vegan products. But as plant-based protein startups like OWYN and Koia grow, established companies that have long played in the animal-based sector are now looking to get in. This year, a number of protein drink makers — from PepsiCo-owned CytoSport to enhanced water maker Protein2o — are introducing new plant-based lines in a move to set the pace in an emerging market.

Plant-based protein drinks are still a relatively small portion of a very broad category — and in some cases animal-based products continue to outpace plant-based growth — but the space has seen sizable improvement within the past year. According to market research firm SPINS, liquid protein and meal replacement shakes made with pea protein were up 13% to $11 million in dollar sales in the 52-week period ending January 14, while multi-sourced plant-based protein drinks were up 4.9% to $27 million.

For reference, products using a combination of animal and plant proteins grew 5.8% to $1.4 billion in the same period. Whey and milk-based drinks were up 63.4% to $68 million and solely whey-based products grew 3.6% to $32 million. Animal-sourced products categorized by SPINS as “general” grew 13.3% to $388.5 million.

In the same period, juices and other functional beverages made with multi-sourced plant-based protein were up 16.4% year-over-year to $19.8 million in dollar sales and plant-based products categorized as “general” were up 110.5% to $713,345. However, pea protein-based products in this category fell 20.7% to $4.2 million. 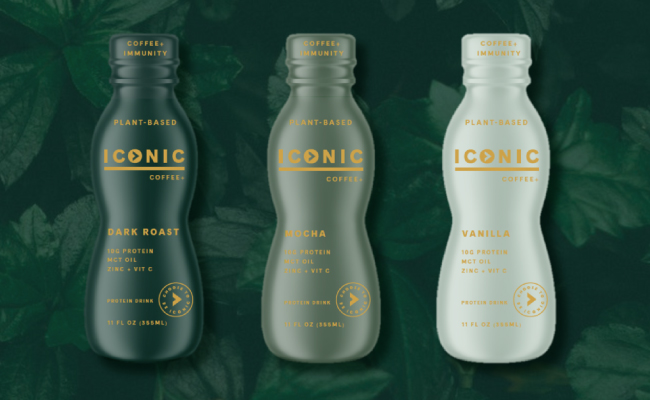 Minneapolis-based ingredients supplier PURIS Foods specializes in plant-based ingredients and is one of the largest producers of pea protein in North America. Speaking to BevNET, PURIS CEO Tyler Lorenzen said he has witnessed a sea change in attitudes and education around plant-based protein over the past 10 years, noting a cultural shift where use occasions have moved from ideological and ethical diets to more common concerns about performance and nutrition.

A former NFL tight end himself, Lorenzen said the adoption of plant-based diets by pro athletes in the past few years has been a key driver in helping mainstream the trend. Star players like New Orleans Saints running back Alvin Kamara and Brooklyn Nets point guard Kyrie Irving have served as key influencers both in locker rooms and in the media, he said. As well, films like the Netflix documentary The Game Changers, which explores athletes with plant-based diets, have aided the category’s growth.

“The trends are similar to what happened in multi-serve non-dairy milk and that same trend is starting to happen in higher protein per serving RTDs,” Lorenzen said. “You look at the almond milks of the world, or even oat milks, and there’s little-to-no proteins in those products. But if you can build an ingredient that is soluble enough and gives that right experience where you can get to five to 10 to 20 to 30 grams of protein per serving, that can really change the different meal occasions and we’re seeing that spread.”

Similarly, rising stars in the food space such as Beyond Meat and Impossible Foods have further boosted consumer awareness of plant-based products across all categories. Lorenzen highlighted the joint distribution venture between PepsiCo and Beyond Meat, announced earlier this week, as another flashpoint in the mainstreaming of the category.

PepsiCo is also making moves towards plant-based on the beverage front as well. After acquiring Muscle Milk maker CytoSport for $465 million in 2019, the conglomerate is now planning to relaunch its subsidiary’s EVOLVE line of vegan shakes in March. A PepsiCo spokesperson told BevNET that more details about the relaunch would be revealed in its upcoming Q4 and full year earnings report, but noted the company is continuing to innovate within the plant-based space.

“EVOLVE is relaunching at a time when plant-based protein is finding mainstream popularity as consumers look toward animal-derived protein alternatives,” said Anuj Bhasin, VP of protein & fitness brands at PepsiCo. “Our vision is to make plant-based protein shakes, powder and bars accessible to all and make it easier to integrate them into everyday active lifestyles.”

In addition to EVOLVE, Gatorade may also be following the trend for its own protein lines. Though there are no confirmed plant-based Gatorade products ready to be announced, the spokesperson confirmed the brand’s R&D team is exploring options.

Last month, enhanced water brand Protein2o announced its first step into plant-based drinks with a new line featuring non-GMO pea protein. The new products are available in Blackberry Basil, Lemongrass Chamomile and Key Lime Coconut flavors and each 11 oz. can contains 15 grams of protein isolate, no artificial ingredients and no more than 80 calories. The line will retail for $2.50-2.99 per unit.

According to Protein2o president Andy Horrow, the line’s positioning as both vegan and low calorie gives it a competitive edge in the natural channel, where consumers are often faced with a one-or-the-other ultimatum among plant-based protein products. CEO Bob Kral added that, although whey protein is currently the fast growing segment, he believes the brand has the opportunity to get in on the ground floor of a plant-based trend that, in his opinion, could be poised to eventually outpace its animal-based competition.

“I think you’re still at the very start of a high growth [period] in the whey protein business as we’ve certainly seen,” Kral said. “But plant protein is something that’s coming and Protein2o doesn’t really want to leave anything on the table. We’ve always led the way in the way on the low-calorie, whey protein side of the business and now we want to lead the way in plant protein.”

Beyond the cultural shift, growth in plant-based protein has simultaneously been driven by innovation and improvements to the raw ingredients. Lorenzen noted that even two years ago it was impossible to make an RTD beverage with 30 grams of pea protein that wouldn’t suffer in viscosity and taste. Now, he said, PURIS will be launching a new line later this year that will make such a beverage palatable.

Elsewhere, ICONIC Protein is preparing to launch its first plant-based RTD line this year with a line of protein coffees. The company, which sells premium, grass-fed dairy shakes, had previously avoided the vegan space due to the poor taste and texture of the source ingredients. CEO Billy Bosch said that the technology has now caught up and it is helping drive brands like ICONIC, among others, to embrace pea and other non-animal proteins. 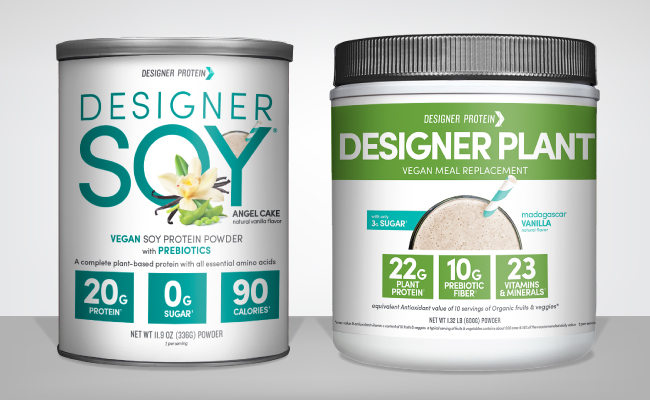 An early adopter of the plant-based trend, Designer Protein has built out a roster of whey, plant and combination protein powders. The brand initially launched as Designer Whey in 1993, but after being acquired in 2011 the company changed its name to encompass an expanding marketplace. According to CEO Paul Pruett, whey continues to be the core of the brand’s business, but as plant-based gains steam much of the company’s innovation is now focused on that space.

This year, the company will launch its powdered Designer Soy SKU. Pruett noted that soy had been a “void” in Designer’s portfolio for years, but the product will reach a different type of consumer than those who purchase pea and rice-based powders. The launch also coincides with a broader move into bars and other food products, which will help the brand shift into an overall wellness platform over the next several years.

While there are many reasons consumers avoid dairy and other animal products, from lactose intolerance to ethics, Pruett said the biggest opportunity for Designer is actually in hybrid blends.

“There’s a lot of consumers out there I think that are actually looking for the best of both worlds,” Pruett said. “I think it’s their belief system where they want to try and cut back on consuming meat and are leaning towards plant-based burgers, for example. But also whey-based and some other animal-based proteins actually have a more complete amino acid profile than some of the plant based options. I think consumers recognize that.”

At ICONIC, Bosch said the company is continuing to innovate in animal-based products as well, particularly within cow-sourced collagen. Highlighting Vital Proteins’ recent sale to Nestlé, Bosch noted there’s still a strong market for these types of ingredients. ICONIC launched its own Collagen Coffee line last year and Bosch suggested it could eventually become a key pillar of the company’s set alongside plant-based products.

As Bosch puts it, ICONIC is willing to hedge its bets on a variety of innovations, but the future is still unwritten. While established protein drink brands are continuing to explore different options, the category is still largely confined in retail to the natural and specialty channel, with expanding presence in grocery. But with competition coming from industry leaders like PepsiCo, as well as startups like OWYN and Vast that have made plant-based their entire brand identity, there’s still potential for a breakout moment.

“I really think that plant-based RTD, at the moment, is still coming,” Lorenzen said. “And you’ll see that you’ll know that it’s mainstream when you’re at your local convenience store where you’re picking up gas and there’s always a plant-based version to buy. Today, I know that that’s not the case.”